Total Eclipse of My Interest 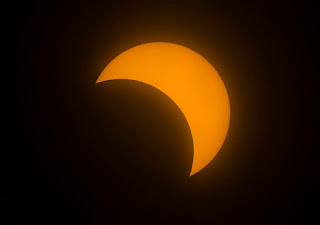 The last time America had this good a look at an eclipse was the year my father was born.  Even knowing that I couldn't' muster any interest in donning a pair of those goofy looking goggles to catch old Sol's dissappearing act.  Stuff like that has never interested me and coupled with the fact that local and national media morons were doing their level best to make the event seem as exciting as the invention of canned beer only made me dig my heels in.  I knew that, just like the moon landing in 1969, the event would be replayed ad nauseam  for the rest of my life.  Yes, I missed Neil Armstrong's lunar tap dance too.  In my defense--if I need one-- I was busy keeping commies out of Kansas as the Army's premier 2nd Lieutenant of the First Infantry Division.  (Okay, I WAS in the Army that summer but chose to just sleep through all that moon lunacy.  I was tired!)  Didn't miss a damn thing. 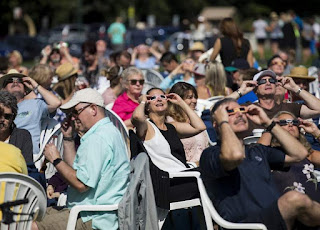 The lawn of the big Coeur D' Alene resort near my home was filled with chairs for watchers, parking lots and the beaches were loaded with people determined to waste their time looking at this enormous non event.  It was more entertaining to watch all those folks look like complete dorks as they cast their eyes skyward.  "Look, up in the sky, it's a bird it's a plane....it's a SHADOW!"  I couldn't help but wonder if any of these people questioned the true quality and safety of the "protective" cardboard framed glasses they were depending on to keep them from GOING BLIND.  Who was in charge of certifying those things??  What if they were just some old 3D glasses from one of the local movie houses that some kid was selling to take advantage of the situation?  I'm for capitalism, but come on.

At least the eclipse lookers here in the Idaho panhandle weren't dumb enough to drive a few hundred miles to Oregon for a camp out with a few thousand weirdos there to witness this celestial sideshow.  That scene looked just a tad too exuberant for my taste.  Not unlike a honeymoon night for a couple of 90 year-olds, the whole show only lasted about two minutes.  I hope they took pictures.  (In both cases.)

All things considered, aren't there far more impressive and beautiful events to see every waking day? A bumble bee, birds, rainbows or your uncle Bud picking up a check for once?

I did snag a pair of those goofy glasses and am planning to take them to the park where I will put them on and look skyward.  It should be interesting to see how many people will try to explain that I have missed the big show.

By the way, I have yet to watch "Gone With the Wind".  It's sort of become a "thing" with me.
Bucket list?  I don't need no stinking bucket list! 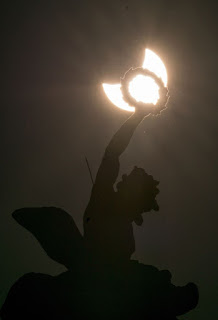 The King Has Left The Building

Every generation has its watershed moments and mine is no exception.  We boomers all remember the line of demarcation that was the Kennedy assassination and, whether you liked him or not, how his death burns in memory as the end of our innocence.  America felt very different after November of 1963.

This week marks the fortieth anniversary of the death of Elvis Presley.  Really?!  Forty years??  At least for me, the "King" personified the beginning of music that spoke our language and let our parents know that the culture now belonged to us and not them.  Elvis was all about free and untrammeled emotion and a never before seen sexual electricity that frightened most adults.  The marriage of what was then referred to as "hillbilly" music with southern rhythm and blues, indigenous to the black community, was all that was needed to confirm our parents contention that the world was going to hell in a big hurry.  Naturally we embraced it and begged for more.  To appease the adults Elvis would sing an occasional hymn on the Ed Sullivan show before launching into Jailhouse Rock, All Shook Up, Teddy Bear or another of his songbook of hip swiveling rock n' roll hits.  Colonel Tom Parker, his Svengali like manager, knew enough to push some of that "good boy" image especially for the benefit of the parents of teenage girls.

I remember buying many of Presley's early 45's to play on my crappy little Sears Silvertone record player only to have dad point out that I was an idiot for spending my hard earned lawn mowing dollars on "that junk".
So much happened in those years from the mid-fifties until Elvis's death on August 16, 1977.  The Beatles and others had eclipsed him and chronic drug abuse and a peanut butter and 'nana sandwich habit of epic proportions had made him almost a character of himself. He sweat buckets of gravy while looking like a Macy's Thanksgiving parade float during his concert appearances.  It was a sad ending for a true rock n' roll icon.

I was on the air at KOGO radio in San Diego on that August afternoon of '77 when the wire services began dinging with the bulletin announcing his death.  I still recall program director, Bill Dodd, bursting into the studio loaded with records and tapes of the King as we transitioned to an "All Elvis ALL the Time" format for the rest of the day.  Now, forty years later, I am retired, radio is no longer the tribal drum of the culture or even relevant,  and records are for antique collectors.  The entertainment business is corporate these days and music is something we stream.   A lot has changed.

Trying to imagine an 82 year-old Elvis seems beyond the pale.  It's doubtful that he would have made it to his 82nd given his condition, and the idea of a tubby gray-haired, liver spotted Elvis slipping around his assisted living facility on one of those rascal scooters just doesn't compute.  Perhaps if he'd merely considered that waking up with a live gopher in your bedroom and peanut butter on the ceiling might have been a significant indication that it was time to slow down?  We'll never know.

I choose to remember the skinny Elvis of the 1950's and 60's when the nation was far more innocent and so was he.  Let the comedians have fat Elvis.  He was a significant piece of the mosaic of our lives and will live on as long as there are a few of us around to recall the magic.  In the meantime, the Gypsy dogs are still barking but the wagons have moved on.

The sun beats on the back of my neck as I head east up the alley that leads to the city park not far from my home.  It feels as if this place will never be cool in spite of the miserable winter not six months gone and still fresh in my memory.  As I walk the circumference of the park--once around equals a half mile--I find it almost unbelievable that my now departed wife and I managed to get our ten thousand steps in during those cold and snowy months that had me believing we might never be warm again.  Slipping and sliding on the ice while we shivered in the cold we told ourselves that this was the ticket to health.  Now I only wish that she were here to see that our old path is not only warm and sunny but hot.  Looking at the trees, some more than two-hundred years old, I find it hard to imagine what they have seen in the past couple of centuries of this ever mercurial Idaho clime.  Our time here is so brief!  This place reminds me of my boyhood home in Michigan where summers often would wait until mid June to appear and the dependably on time winters would bury us in snow.  California, our home for more than thirty years, had none of that and I realize now that I missed it.  Thirty-four years of "night and morning low clouds and haze with highs in the sixties and seventies" became a little monotonous.   Iowa's weather was the worst.  I spent my high school years in the northwest corner of that state and recall enormous snowfalls that required my brother and me to rise before the sun was up to shovel our driveway to allow dad to make it to work.  Massive drifts would sweep across the front of the garage and the sting from the pellets of snow hitting our faces was enough to convince me that I never wanted to live in what the weather experts refer to as a "continental clime".   The relocation to Idaho just three years ago provided a pallet of four definitive seasons without crazy cold or heat, in spite of this year's exception.  It rains a little too much, but you can't have everything.

"Do you plan to stick around?", is a query I hear often.  It doesn't bother me as I understand why people might wonder.  Having moved frequently I am inclined to stay put for as long as I can.  Lake Coeur D Alene and the folks of the Idaho panhandle have been warm and welcoming to Linda and me and were there for us through the difficulties of her battle with cancer.  Always lucky when it comes to neighbors, this place has been no exception.  The entire neighborhood had our backs and continues to keep me on course.  I could ask for no better.  I think I'm here until they kick me out.

My son-in-law took hundreds of pictures at Linda's life celebration cruise and I continue to sort through them and smile.  Here are a few more from the July 29 event.

We ALL Loved Linda

The weather was perfect for a night on the lake.
Between sixty and seventy friends and relatives helped me celebrate my wife's life and it was a wonderful evening.  Both of us were adamant about not having a funeral.  We hated attending them and often spoke of our desire never to put friends and family through one of our own.  No, we would have a party, a cruise!  It was in our wills.  Secretly I had always imagined that it would be Linda putting together a blowout for me but, sadly, she outsmarted me and beat me out the door.   Lucky for me our daughters took charge of most of the details and made sure everything ran smoothly.  All I had to do was my usual, "dumb old dad" act.  Type cast yet again.

We partied with people from all over the country, some I hadn't seen in more than thirty years.  I kept thinking that Linda would have loved seeing them too and, who knows, maybe she did.

My daughter Kelly's husband, Pavol, took tons of pictures of the celebration and I have just now begun to sort through them.  I offer a few of them here for those of you who knew and loved Linda, but were unable to attend.  You missed a good time.  The hard part was going home to a house that seems more than a little empty without her.  I may never get used to that. 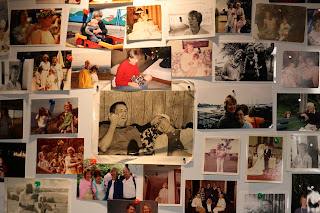 Posted by Ken Copper at 1:39 PM No comments: