It's Official...Stooges Now Run The Show 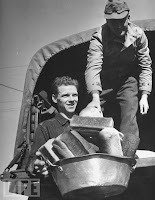 One of the first things that happened to me during Army basic training in the 1960's was something called KP. Kitchen Police is the detail that had America's fighting men doing things like washing mountains of dishes, cleaning grease traps, hosing out garbage cans and helping mess sergeants prepare fabulous Army fare like mush and SOS. KP was abandoned when the military decided to go with civilian contractors for meal preparation and dispersal sometime in the 1970's. (Civilian contractors...what a concept!!)
I've been thinking a lot lately about my time in the service and the three or four times I had KP and it's not just because I still have dishpan hands.
No, KP remains etched in acid on my frontal lobe for one particular reason. My first day of KP taught me the most important fact a person can come to know about large organizations (see government) and their ability to run things. They can't! I arrived at this ultimate truism after spending an entire day pitching perfectly good roasts, hams and turkeys into a couple of massive dumpsters parked outside our company mess hall. There was nothing wrong with these items save the fact that they were "over supply" and it was a court marshall offense for a mess sergeant to be caught with any kind of supply "overage" at the end of the fiscal year. It ALL had to go. "No", we were told, it couldn't be given to a food bank or other charity. It had to "disappear"--NOW!
This was my introduction to how the government handles the details of running a big operation. They, I concluded, couldn't manage a two car funeral and in the more than forty years that have passed since my Army service I've seen nothing to change my mind. You see I HAVE dealt with the IRS and also been to the DMV.
Now we have congress handing us a big steaming pile of national health care that will make sure that every American has the proper medical attention free of charge. Well, free if you figure that you are going to be out of town when they pass the hat for the $3 trillion that its going to cost. I'm guessing that it will take a whole lot more than the "rich", as defined today, to make up the tax shortfalls that this will manifest. Get ready for higher income taxes and a national sales tax just for starters. Oh, and while you're at it, you might want to get in line for a doctor. Even if you can find one, the good ones will want cash; not some government IOU.
It is beyond my ability to understand how the same folks who hate BIG BUSINESS and BIG RELIGION are willing to trust BIG GOVERNMENT with the most important things in their lives. If you don't like big business, don't shop at WalMart. If you don't like church, watch cartoons on Sunday morning. If you don't like big government----YOU'RE SCREWED!
What the hell happened to the idea that the federal government was there to protect our borders, deliver the mail and not much else? The people who think the government has the solution for all of their problems and can fulfill all of their hopes and dreams are the same clowns who would have been eaten by bears a couple of hundred years ago.
Get ready to start filling your own teeth.
Doctors Larry, Moe and Curly are in charge now. 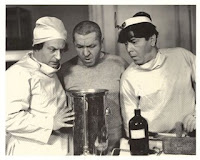 "Where's that change we can believe in?"
Posted by Ken Copper at 4:07 PM No comments:

You Shouda Been Here Next Week!

"Yeah, next week everybody naked."

Suddenly I was feeling like I needed some of the wife's seasick medicine as I scoped out the amorphous blobs of aging decomposing flesh around the ship's pool. 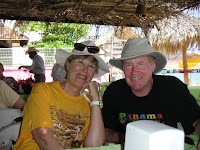 "Whole cruise be clothing optional, oh boy!" This seagoing bulletin was being relayed via one of the "pool butlers" who were busy catering to the whims of landlubbers like us bound for the Panama Canal aboard the ship Constellation. And, as it turns out, pool butler Esteban and his compatriots were correct about it all. In fact, most of the ship's crew had been undergoing sensitivity training for the past few weeks to prepare themselves for the coming onslaught of uncovered flesh. (How does that work? "Everybody grab some of these pornos to watch this weekend.") A class on how to overcome the gag reflex would been more useful, but I digress. I began to speculate about the nudie sailing and wondered if there would be prizes. You know..."Best dimpled thighs", "most original use of cellulite", and "Sexiest dried arrangement", the mind reels at the possibilities. Since we hadn't been invited I would have to wait for news of how this one went. (Most of the crew being Muslims from Indonesia; put the odds of a High Seas jihad on Red Alert in my book.) 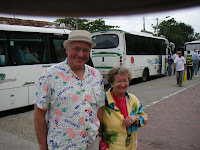 Linda and I teamed up with my pal of fifty years, The Skipper, and his wife Betty for our "bucket list" check off of the Panama Canal navigation. They are always good for laughs. It's a guaranteed yuk every day just to see what the Skip is wearing. He won't wear clothes with Polo ponies or alligators, but shirts and lids not seen since the days of Ralph Cramden and Ed Norton at the Raccoon Lodge in Brooklyn are consistently in the mix. (see photo)
Marching to a different drummer? The man is the leader of a musical aggregation not of this world. I've often surmised that he's the love child of Whoopee John and Patsy Cline. It is also helpful that the Skipper was actually once a real skipper of big oil tankers and has navigated the Canal on many previous occasions. All I had to do was keep the cocktails coming and the sea stories would unfold as we traversed the locks. 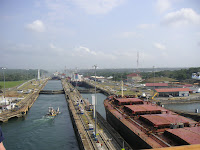 The Canal was amazing. I had read David McCullough's "The Path Between the Seas" several years ago and was again reminded of the massive scale of this remarkable piece of engineering. It is a wonder to behold, and America did it when no one thought it possible. You owe it to yourself to see it. It will make you proud.
After navigating the Canal Zone we made a brief stop in Costa Rica which did not disappoint. There is much beauty in that corner of Central America and the price of just about everything will remind you of the U.S. in the 1960's or 70's. Nice place.
Before sailing to San Diego, (we started in Miami), there were a couple of stops in Mexico.
Mexico always makes me sad. It is such a beautiful country with friendly people and bountiful natural resources yet is, after so many years, unable to realize anything close to its potential. The natural resources alone should make it a rich country; so why does everyone remain so poor? Some day they'll figure it out and get rid of the idiots running the country.
We made it back to San Diego after two full weeks and, as you may have guessed, took a pass on the "clothing optional" leg of the cruise that continued on to Hawaii. I wonder how many of the crew abandoned ship in Honolulu with severely damaged retinas. After eyeing the clowns boarding the ship in San Diego, I tried to imagine how many hands would make it past Point Loma?

"All passengers are invited to participate in the shuffle BROAD tournament on the aloha deck at eight PM."
Posted by Ken Copper at 2:52 PM No comments: