A door closes; another opens...

It was a good jiggly run.
John Joseph Houghtaling, the inventor of the "magic fingers" vibrating bed, checked into the mahogany Hilton last week. He was 92.
Who knows how many bad backs were granted 15 minutes of tingling relaxation and ease for just a quarter, or how many marriages were saved for fifty cents? Hell, Jimmy Buffett even sang a song about it. Magic Fingers was rousing success in its heyday of the 1960s and 70s. There were roughly 175 franchise dealers across the USA, and the gadgets each brought in about $6000 to $7000 a month...in quarters. Not bad.

You don't find magic fingers in hotels and motels very often these days and it's a shame. Of course, based on the escalation of hotel rates, fifteen minutes would probably require you to visit the mortgage loan department before receiving your tingling and ease.

The Hare Krishnas living in New Vrindaban, West Virginia are looking for some help. It seems that the cattle sanctuary they created four decades ago needs your support. The Krishnas, not big believers in eating cows, would like you to adopt a cow. For $51 smackers you can feed bossie for a month, AND for just $108 you would be providing "special care for retired cows who can no longer breed of give milk".
WOW! Fetch my wallet! This is like our Social Security system-- only better.

I really would like to help. Here is another million dollar idea that I'm willing to throw out FREE OF CHARGE:


My family still has a small farm in central Illinois. My brother and I would be more than pleased to provide pasture for retired Bovine Americans for...hmmmm, let's say a more than reasonable fee. (Hey, we're givers! We can't help ourselves.) In fact, I'm thinking that maybe we can cut a deal with the Magic Fingers company, now that business isn't what it used to be. We could bury some of those vibrating machines beneath our pasture and massage those big beautiful four legged bags of methane into a cow coma. In the interest of "keeping it Krishna", we would only charge the cattle the original 25 cent rate for fifteen minutes of jiggle.

Just think of the miles of smiles at the Old Copper Corral!

We'll need some partners on this deal, of course. How about getting together sometime next week?
Let's meat, (oops), meet at Ruth's Chris.

So, here we have John Harwood of NBC getting ready for yet one more media "softball" session with our new el presidente and what happens? The commander-in-chief nicely nails a pain in the ass housefly with a very deft blow and PETA goes nuts.
PETA, in case you didn't know, stands for People Eating Tasty Animals...or something like that. (Hey, I'm a kidder.)
Actually it stands for People for the Ethical Treatment of Animals. (I like my acronym better.)

Here is my question: Since when is a goddamn housefly an animal??!! It's a soulless FREAKING INSECT!! Flies are a delivery system for every disease and parasite known to man. These winged angels of pestilence tap dance on all things disgusting, (dog crap for starters), and happily seek us out to "share" the experience. I hate them. 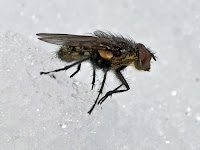 PETA people need to take a good look at their priorities. It's one thing to be against kicking dogs and cats, or cooking them for that matter, but PLEASE get real about some of the other stuff. Calling fish "Sea Kittens" so we won't eat them? Protecting nasty houseflies?? Come back to us PETA people. You're in lunar orbit.
By the way...this particular incident reminded me of one of my guttersnipe junior high pals, Joey the K. Joey used to capture flies in study hall and tie a thread around their tiny thorax's like they were pets. This was highly amusing to the rest of us at the seventh grade table especially when Joey would yank just a little too hard and the fly's head would come off. PETA should have been there. Now that was entertainment!
I choose to look at this big deal "flygate" incident as an opportunity for new dialog with the Obama administration. Maybe we don't see eye to eye on the monetary system, the supreme court, health care or basically...ANYTHING, but we by-God agree on what to do about flies. YOU KILL THE BASTARDS!
Posted by Ken Copper at 2:47 PM No comments:

I've got your car right here...MAGGOT!

I guess it was in the paper the day before yesterday.
It was one of those stories that you initially think is a gag.
There was a picture of a high school kid sliding into the driver's seat of a Ford Mustang GT convertible as several admiring adults looked on. Immediately I was drawn to the story...
Why was he getting this cool ride? What had he done to merit such a nifty sled? How come I never had a slick set of wheels like that until I was WAY out of high school? You know, the usual questions of an aging yet still adolescent male.
So, I read the story.
The lad was being given this fine set of wheels for...PERFECT ATTENDANCE!
What???!! Yes, he was being handed the keys for merely showing up for school every day. DAMN! I read the story a second time because I thought I must be missing something. Turns out the only thing I was missing was not being born in this kid's generation. I hate to sound like a geezer, though that is exactly what I am, but kids didn't get cars for perfect attendance in MY DAY!
I sat on this story for a couple of days and finally decided to rant about it in a blog. Since I no longer had a copy of the paper, I decided to use Google to find the picture that originally ran in the San Diego Union-Tribune. I typed in "student gets car for perfect attendance" and was astounded to find that there are hundreds of schools doing the same thing nationwide.

I was especially intrigued by the story of the suburban Chicago twelve-year-old girl who won a car.
How do the schools promote this? Do they send a note home with the little slugs? "Make sure that Billy and Susie show up at our very fine institute of secondary learning and he or she COULD WIN A CAR!
This is NO way to run a railroad, or a school for that matter!
In my day...(God, I AM OLD), we had a different kind of incentive. It went something like this:
"Hey gang, if you skip school we can have you arrested and thrown in the motel with bars." "Oh yeah, and if that doesn't work for you, we can arrange for you to get drafted EARLY." (Yes, boys and girls we had something called mandatory military service back in my day.) Of course that was back when our government acknowledged the fact that we had enemies who needed to be "taken care of". (See: KILLED) Now, of course, we know that folks who want to destroy us are merely misguided and need to "cool off" in a fine resort facility until we can read them their Miranda rights. But, that is a rant for another day.
No...this man was our incentive for hauling our ass to school each day. 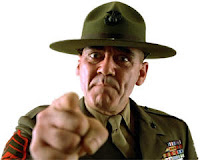 "If you ladies leave my island, if you survive recruit training, you will be a weapon. You will be a minister of death praying for war. But until that day you are pukes. You are the lowest form of life on Earth. You are not even f#@&^ing human beings. You are nothing but unorganized garbastic pieces of amphibian crap. Because I am hard you will not like me. But the more you hate me the more you will learn."---Gunnery Sergeant Hartman
Maybe the schools should try this incentive for awhile...
STAY IN SCHOOL OR I'LL BE YOUR NEXT PRINCIPAL!
"And, give me the keys to the car."

"You're gonna LOVE our school maggot!
Posted by Ken Copper at 2:46 PM No comments:

Doug, my son-in-law, and I exchanged knowing glances as the superdooper deallybopper thingy glided over Katie's abdomen. (Sorry for using technical terms, but I played doctor as a child.) We were at the doctor's office for the baby ultrasound and the picture on the screen was unmistakable. There HE was. In fact, the technician remarked that he was at that very moment hanging on to his "he" thing as we gawked. (For the record, my grandson appears to be sporting the Milton Berle model.)

Son of a gun! Both of us knew what this meant. Doug was getting an early look at the guy who would one day wreck his car and cost him bail money. I reminded him that though it was time to start saving for both of those inevitabilities he could at least look forward to getting a pass on wedding expenses. There is compensation for everything.

I also reminded him that he was about to save a fortune on clothing too. Little boys can go at least twenty years in t-shirts and bluejeans. (I've managed to stretch it to 61.) And...when it comes to entertainment, all you need is a good jar for catching bugs and frogs and maybe a sack for bringing home funky looking rocks. Sweet!

Granted, there is frustration ahead with regard to getting the kid to bunt when he wants to swing away. And, don't get me started on the infield fly rule! But, overall, boys are pretty easy to handle until they get big enough to do that "wreck the car" thing and the "felony" thing. (Not to mention that reckoning that comes when your own son is big enough to knock you into the next county.) That's when raising girls starts to look like wining the lottery. 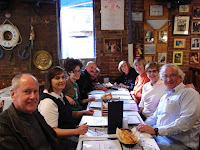 The kids haven't decided on a name yet, but they have until October. I've suggested Delbert and Dewey and have met great resistance on both. However, the middle name "Danger" is a lock. That is an idea too superior for words. "Danger is my middle name." Freaking brilliant!!! Chicks will dig it.

The best news of all as far as this soon-to-be grandpa is concerned is this: Starting this holiday season I will have company at the kids table. Food fights and bad behavior until milk comes out our noses will reign for years to come.

The world is spinning in greased grooves.

Posted by Ken Copper at 1:50 PM No comments: