Somehow, and I consider this a very lucky somehow, my family and I have had an amazing run of really great neighbors.  Almost without exception all have been delightful wackjobs with interesting life stories and occupations.  A standout in the bunch is Dennis Lynch.  Dennis, his wife Meredith, their kids, the unforgettable Elvis the cat, and two exceptionally stupid beagles named Bucky and Betty  were our nextdoor neighbors for eight years during the late 80's and early 90's in Encinitas, California. There was a well worn path between our houses that offered mute testimony to many shared barbecues, cocktails and bust-a-gut laughter.  We had a blast and have remained friends over the years.

Like me, Dennis put up with the vagaries of life in the broadcast business.  He primarily worked as a freelance much in demand cameraman who ultimately wound up in harness at Court (now Tru) TV.  He was on the road almost constantly as he covered everything from the O.J. trial to the televised courtroom dramas of Michael Jackson, Robert Blake , Scott Peterson and assorted other dirtbags.  His ribald and snarky after the verdict stories were never disappointing.

With the advent of email Dennis began to, mostly out of boredom, compose daily missives detailing his adventures in court with these many and varied sociopaths and would post them to his friends.  They were hilarious and I wasted little time forwarding them to others I knew who would appreciate his vicious insight.  The response was almost always, "this bastard should write a book!"

And, now he has…
It's a fantastic inside view of the trial of everyone's favorite commando clad camel humper the dimwitted despot,  Saddam Hussein.   This book is not only loaded with a ton of information you never heard about the Baghdad D-bag but also contains loads of inside humor that will have you wondering where this smartass California camera guy has been all your life.  Reading Shooting Saddam is like having a couple of pops with a very entertaining nextdoor neighbor.  (I think I know what I'm talking about here.)  After finishing the book I now wonder how difficult it would be to get Dennis and Meredith to load the van for Idaho.  There aren't too many books about snow, moose hunting, and huckleberries let alone anyone who could make them funny.  I think I'll work on making that happen.  Surely California and "Moonbeam" Jerry Brown have just about worn them out.

In the meantime, BUY THIS BOOK!  It's easy to download from Amazon and I'm fairly certain your doing that will go a long way toward helping Dennis forget that I accidentally moved his two good rakes and very cool riding lawnmower to the Great Northwest. 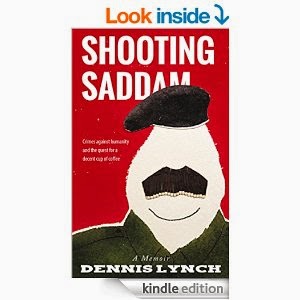 Posted by Ken Copper at 8:03 AM No comments:

Like a second story burglar Christmas slipped into the high definition big screen TV of my life this year.  I'm late on just about everything.  Cards are leaving my out box like molasses in, well, December and decorations, presents and all that other stuff are all about two weeks behind.  I blame the new house and our big move from San Diego to Coeur D Alene but am willing to admit I'm just Christmas lazy.  If I'm honest, it happens most every year.

An early Christmas surprise has been the visit of Katie, our youngest, and her family.  They arrived this week and will head back to California this Sunday so that grandson Dan can have Christmas at home.  That means we celebrate early in rainy and cold north Idaho which should give the kid a taste of what the holiday was like for his grandparents during their Midwestern childhood.  Christmas was never 70 degrees and sunny back in pre-historic times.  As I recall, we were just happy to have enough snow on the ground to check for reindeer tracks.
It has been fun to experience the season through the five year-old eyes of our one and only grandchild.  He has already opened his presents which included his very own pool cue so that, with luck and training, he will always have pool hustler skills to fall back on should legitimate employment prove elusive. A Spiderman spinning rod was also in the mix in keeping with that old adage about "teaching a man to fish…blah blah blah".  I prefer to think of it as a ticket to one of the best sit down sports a boy can always enjoy.

Last night we took advantage of a boat cruise to Santa Claus Island that is a tradition here in Coeur D Alene.  Kids are treated to an unforgettable ride and light show that culminates at the North Pole where Santa and his elves greet them with a reading of the naughty and nice list for the year.  I'm happy to report that Dan made the 2014 nice list.  The relief on his face when he heard his name was priceless.  As an almost permanent occupant of the naughty list I was hoping to hear my own name upgraded to "nice" but no Ken was announced.  Perhaps my past misdeeds have been expunged?

Like everything in life this Christmas is moving at warp speed.  The Valentines Day promotions most likely begin on December 26.  So, if you want to put this Yule in slow motion I recommend finding a five year-old to slow it down.  When you're five it seems that next Thursday will never come and no way will the anticipation exceed the reality.  The kids know that Christmas is the real deal.

It was hard to miss the irony.  There on the financial page, as I killed time waiting to board the plane home from New Orleans, were two stories that went a long way toward explaining why most of us hate to fly.  Americans are getting fatter.  The story with the Detroit dateline told of a Michigan based company, Humanetics, now introducing newer "wide bodied" crash test dummies.   According to the Centers for Disease Control 34.9% of us are obese and are sporting a much larger body mass.  A quick look around the Delta boarding area convinced me that that estimate may be slightly conservative. More than a few of my fellow passengers looked to be smuggling excess adipose tissue in their jeans.  I found myself trying to remember the approximate dimensions of the emergency exits and how I could position myself to be the first one out the door should the plane run into trouble.  "Stand aside porky, I'm comin' through!" I will confess to larding on five extra pounds in the last year but nothing that would qualify me for Ringling Brothers.

Like my portly sky roadies, the new crash test dummies are soon to approximate a 273 pound adult.  Wow!  Think about how worried the car manufacturers must be.  A Jumbo dummy hitting an abutment at 40 miles per hour will probably take out the entire front end of any new automotive rolling stock.  It won't be pretty-- just accurate.

The other story on the same page was a release from General Mills proudly announcing the return of their French Toast Crunch cereal.  (the crack cocaine of breakfast treats)
Of course the story made a big deal of a few "modifications" made to the ever so delicious way to start your day.  They have reduced the sugar and increased the whole grain content.  Translation:  it's now only 50% sugar.  Hey, that's what makes it so damn good!

Here is what struck me as I read these two stories:  If the people who test cars know we're getting to be enormous and the management at General Mills is hip to the fact that we can't resist sugar, why the hell can't the airlines figure out that WE NEED BIGGER SEATS AND MORE LEG ROOM??!!
It's bad enough that they gouge you for checking a bag, (shouldn't they charge for carry-ons?), and cram more and more passengers on fewer flights, but they don't seem to get that seats are too small and leg room is nearly non-existent.  I understand that tickets are relatively cheap but, come on!  Raise the price a little if you must, but GIVE US A LITTLE ROOM!  Or, knock us out until we get where we're going. (Nitrous oxide anyone?)

There has to be a better way to fly.  Private jets for all!
I'm surprised Obama or another Washington phony hasn't figured out a way to promise that one.
In the meantime, pass the French Toast Crunch and put me in an aisle seat next to that skinny lady.  After all, pain is mandatory but suffering is optional.

Posted by Ken Copper at 3:40 PM No comments:

Brrrr, It's Time For a WARM UP

Last Friday evening, after standing in the freezing rain to watch Santa arrive in our new hometown of Coeur D Alene, Linda and I decided that maybe a dose of warm weather might help ease our transition from Southern California.  My old pal, the Skipper, no doubt full of holiday cheer and Jim Beam, had recently suggested that we join him and his wife Betty in New Orleans at the Work Boat Show for some laughs.  The Skipper owns a barge and tug company in New England and often attends the event to scout new equipment and catch up with other salt water reprobates.  Knowing that the broadcast business was another bum producing industry, (second only to the carnival business), he knew I'd fit right in.
As you read this we are on our way back to the refrigerator that is Northern Idaho refreshed and re-charged from a week in the Big Easy.  We will warm ourselves all winter long on memories and calories that cling to us as we journey home.

After settling in at the hotel and registering at the convention, we set out for Felix's Oyster Bar which features the absolute best bi-valves in this hemisphere.  I love the place.  Though I can no longer down ten or twelve dozen in an evening like I could in the 70's, it is still necessary to call Triple A to tow me away from the place.  Oysters this good are a religious experience; maybe even a tax deductible medical necessity.


We spent Thursday at the World War II Museum, a national treasure located on Magazine street in the warehouse district of New Orleans.  Thanks to good friend, Sue Lampton, we were treated to a sneak preview of the museum's newest pavilion, Campaigns of Courage:  The Road To Berlin section, which opens next week.  If you have yet to visit this magnificent salute to the generation of men and women who saved the world, put it on your bucket list.  You won't regret it.


It was a fantastic week to be in New Orleans.  The weather was perfect and the food superb.  I'm thinking that we need to make this an annual event.  The Work Boat Show, the World War II Museum and a few hundred of the Gulf's finest oysters consumed with other aficionados bellied up to the bi-valve bar at Felix's seems to me  an unbeatable combination.  Maybe Santa will want to join us?  Men of size--Fats Domino anyone?-- are always more than welcome in "the land of red beans and pinball machines".